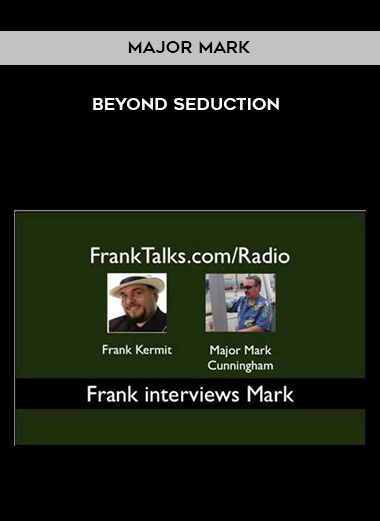 You can either listen using the player or read the transcript below.

Frank Kermit: You’re listening to Frank Talks Pleasure and Lifestyles, and I’m Frank because I have to be. In studio today with Mark Cunningham. How are you there, Mark?

Frank Kermit: Oh, me too. This is one of the first seduction-related interviews you’ve done in a long, long time, I believe.

Mark Cunningham: Yes, that’s absolutely correct. When I stepped away from doing the seduction seminars, people assumed I just kind of disappeared into the mainstream hypnosis world.

Frank Kermit: Well, I have a question for you about the seduction community.

Frank Kermit: This is something that I discussed with a lot of other seduction instructors and gurus. Where do you think the future of this community is going to go?

Mark Cunningham: Well, I can render an opinion on where I would like to go, which is I would like to see it broaden its focus. In other words, the seduction cannot be an end in and of itself. It’s like taking a tiny little slice of life that’s not all that difficult and blowing it up into this enormous perceived problem and associated solutions.

I would much rather see these people who do have something going broadening their take out to teach more about what it means to be a man in a modern world, and specifically, once you have honed your seduction skills and you’ve developed yourself to the point where you no longer are worried about this, it’s reflexive.

Well, what then do you do in terms of finding women that you genuinely enjoy and building them into your life? What is that like? How do you treat these women on an ongoing basis? What kind of opportunities for pleasures and resources do you have, and what happens next?

Frank Kermit: You know, I really like this line of thinking that you’re embarking on. I’ve seen this community completely expand on the topic of pickup. It’s all about the pickup. It’s all about your next conquest, and one fundamental thing that’s missing, even amongst some of the instructors and gurus out there, is the lack of relationship management skills, and it amazes me that more people haven’t learned to delve into maintaining relationships because a lot of these well known gurus are able to collect a lot of numbers, collect a lot of lays. They can collect a lot of women in their life, but they can’t keep the women around.

Frank Kermit: I think that the majority of guys who study seduction get into it because either they want that one girl that got away, or they just want to get themselves a girlfriend, or they want to get married. They don’t want to be alone. Some of them even want to have families.

I’m part of that category, and learning seduction and pickup is a wonderful step in that process. You need to at least master some of the beginnings of how to initiate a relationship. But how to maintain a relationship is a whole other skill set that I think is just not getting its due attention.

Mark Cunningham: Well, to be fair, Frank, when a guy is at the point where he can’t imagine walking up and talking to a woman he actually desires, the idea of, “How do I move through the world, accepting as a matter of course, that highly desirable women will be willing to walk through fire just to make me happy because that’s the best how they want to relate to me,” I mean, that’s total science fiction for these guys.

Yeah, it would help if the role leaders and models in the seduction universe would address themselves to the broader problems. Well, as they say, how do you become fully human? How do you move through the world as a man?

Frank Kermit: You know what, I fully agree and one of the things, and I’ll say it again about it, you actually really like women. You come from a place of genuine love for women, which I think is missing in a number of the seduction gurus out there who really have an incredible amount of hatred and frustration with women.

Mark Cunningham: That’s true, and there is a very little trick I use to play on guys on seduction seminars. When they were talking about these highly intrusive, overt techniques they are going to use to manipulate women, I would begin to use those techniques on the guys in the seminars and inevitably it just cause an uproar in the seminar while it is still going on, “Why are treating me like this? Why are you trying to manipulate me? Why are you holding me down? Why are you slamming me?” And I would explain what they were doing and they would just absolutely dumbfounded, and I said, “Well, isn’t it okay that I do these things to you?” And they are going, “Well, no. Why would you treat me like this?” And I’m saying, “Well, why would you treat a woman like that? How do you expect she’s going to respond to you?”

So many of the intrusive, heavy handed techniques are actually a form of screening. You drive away the quality women and the only ones who respond are the ones who are weak and damaged and are willing to put up with that kind of crap.

Frank Kermit: Amen to that. When I run into… and this is some advice I’m going to ask from you directly here. When I run into a guy who is just got an incredible amount of hatred for women, I can understand it. I can understand where he’s coming from. My autobiography from Loser to Seducer, when I had hit rock bottom, I certainly didn’t have a lot of love in my heart for women at that time.

Frank Kermit: I can understand it. I can relate to it. It is a frustration that completely takes over. At this point, what I tell a guy is, “Yeah, you are frustrated, but that’s just because it’s your own fault. You have to take responsibility for it, and you’ve got to remember that in the end, if when you want is a relationship, any relationship built on hate is not going to be relationship worth having in the long run.

Be the first to review “Major Mark – Beyond Seduction” Cancel reply
Digital Delivery
We are using Paypal for our auto-payment gateway.
If you have any difficulty in settle your payment with us, please contact our Customer Service team via:
Skype: [email protected] (Intell Centre Customer Services)
Email: [email protected]
Facebook: https://www.facebook.com/IntellCentre/

Igor Ledochowski – How To Have A Successful & Fulfilling Hypnosis Practice