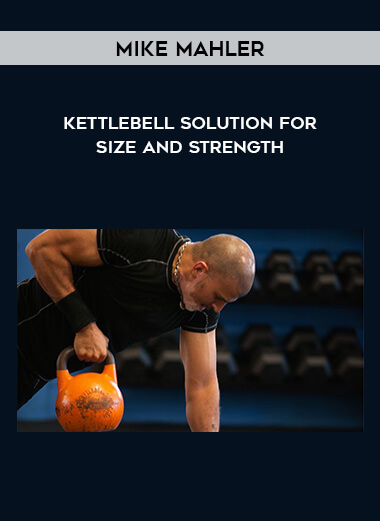 It does not take a rocket scientist to realize that most of the above kettlebell exercises require two kettlebells. Why? The reason is obvious more resistance equals faster hypertrophy and strength gains. Lets use the example of the Double Military Press to illustrate this point further. When you press one 70lb kettlebell overhead your body is working against 70lbs total. When you press two kettlebells overhead, your body is working against 140lbs. I say body, as the military press requires a full body effort when executed properly. To lift the most weight overhead, you need to flex your butt, legs, stomach, lats, shoulder, triceps and bicep.

The more weight that your body has to work against, the more intense the exercise is and the more hypertrophy will be developed. If lifting one kettlebell were superior or even just as effective, then why do thousands of bodybuilders and athletes focus on basic compound barbell exercises? Why not do one-arm bench presses instead of two-arm barbell bench presses? Unilateral exercises are great for addressing imbalances and have a place in a training regimen.

However, focusing on compound bi-lateral exercises is the way to go for maximum size and strength. Lets use the example of the kettlebell front squat to drive the point home. Do you really think that front squats with one 88lb kettlebell will be as effective as holding two kettlebells? Sure with one, your core has to work hard to maintain balance, but you are only working with 88lbs. With two kettlebells, you have to work against 176lbs and believe me this is harder than it sounds. Holding two big kettlebells in place for full body squats requires concentration, a strong upper body, and some strong wheels. The payoff? You get bigger and stronger legs.

The only exercise listed above that is done with one kettlebell is the Turkish Get-up. The TGU has many benefits. One, TGU’s builds a strong core, which is mandatory for heavy leg and overhead work. Two, TGU’s build up shoulder flexibility and stability, which is critical for strong pressing. The double windmill will work as well for building the core and shoulders. However, the TGU is still a wise choice to implement.

Next, lets go over a twelve-week training program to get you going:

5×5 training is a standard protocol that has been around for many years. It is also an extremely effective way to pack on some size and strength. It was a favorite of legendary bodybuilder Reg Park who just happens to be Arnold’s idol. Here is how it works. Pick a training weight and do five sets of five reps. If and when you can complete all sets of five, increase the weight by five to ten pounds and shoot for five sets of five again. Take three-minute breaks in between each set. Obviously incremental weight increases are not possible with kettlebell training so we have to look at other factors to manipulate. One factor to manipulate is time under tension. When you can do 5×5 with a quick tempo, increase the negative to four seconds and the positive to two seconds.

When that becomes easy, try five seconds up, a pause at the bottom and five seconds down. Another factor to manipulate is the breaks between each set. Instead of taking three-minute breaks in between each set, take two-minute breaks. When that becomes easy, decrease the breaks to ninety seconds. When that becomes easy, go to sixty seconds. When you can do 5×5 with one-minute breaks and slower tempos, I have no doubt that you will be ready for some heavier bells. A third variable that can be manipulated are the training exercises. When you can do 5×5 on the standing Military Press, work on 5×5 on the seated press, and then 5×5 on the Sots Press. When you can do double swings easily with 5×5, move up to double snatches. There is always something that you can do to make an exercise harder or a training regimen more effective.

Here is a sample 5×5 kettlebell Program:

Same directions as A-1 and A-2

Same directions as above

Same Directions as above

Take a day off in between each workout. In other words, do day one on Monday, day two on Wednesday, and then Day 1 again on Friday.

After four weeks of the 5×5 protocol, it will be time to ramp up the volume with GVT (German Volume Training)

I learned about German Volume Training (GVT) from top strength coach Charles Poliquin several years ago. Coach Poliquin stated that many German athletes used the GVT protocol to successfully add ten pounds of muscle. Here is how it works. Take 60% off your one rep max on an exercise and do ten sets of ten reps. Use the same weight on all ten sets and do not increase the weight until you can do ten sets of ten with the same weight.

This program is of course very effective, but extremely brutal. Ten sets of ten on exercises such as squats and deadlifts are real pukers and great way to handicap you for the rest of the week. I remember the pain of getting up in the morning the day after doing GVT for legs. Another drawback with GVT is that while following a 10×10 protocol will increase muscle size, it does not increase brute strength. In fact many trainees reported that they actually got weaker after six weeks of GVT. Hardly the results that we are after.

Thus, I think that changing GVT from 10×10 to a starting program of 10×5 is more appropriate. Now since we cannot increase the weights incrementally with kettlebells, lets work on other factors. First, start with 10×5 and when you can complete 10×5, go up to 10×6. When you can complete 10×6, go up to 10×7. Once you can do 10×8, move up to heavier kettlebells or pick harder kettlebell drills and start back at 10×5. You can even start at 10×2 or 10×3 to get started and gradually work up to 10×5 and above. Use the same kettlebells for all ten sets rather than doing the some sets with heavier bells and some sets with lighter bells.

One final modification that you can do with GVT is to pick two exercises instead of one. For example, do one-legged squats for five sets of five and then double front squats for five sets of five right after. The total volume will still be ten sets. This is a great way to get around possible overuse injuries and the sheer boredom that can come with doing ten sets of the same drill over and over again.

Here is a sample GVT/Kettlebell Programs

Take a day off between each workout. In other words, do day 1 on Monday, day 2 on Wednesday and then Day 1 again on Friday.

High Intensity Training is one of the most controversial training programs around. People either swear that it is the greatest thing since sliced bread or that it is complete garbage. Like many things in life, the truth is often in the middle. The truth about HIT and really any program is that it does not work forever. Many people test drive HIT and are amazed with the progress that they make in the first few weeks. They often believe that they have found the holy grail of training and preach the benefits of HIT to everyone in site.

Even after their progress comes to a screeching halt in four to six weeks, they still hang onto the false belief that HIT is superior to every other form of training. Unfortunately this blind devotion only results in training plateaus and frustration. Executed correctly, HIT works great for about four weeks. After four weeks, you adapt and it is time to move on to something else. Lets go over what HIT is and then discuss how to incorporate it into kettlebell training for strength and size.

With HIT the goal is to do a few sets, usually no more than three and to take each one to failure. For many HIT trainees, it is usually one all out set that is taken to absolute failure. Absolute failure means that you cannot possibly get another rep in the set no matter what. Once you have completed this one super intense set, you move on to the next exercise. You have done all that you can do to build that muscle. Sounds great in theory. However, it is not the best approach to take to really benefit from HIT. I believe that doing three low rep sets and taking the third set to your limit is a better approach. With this approach you build up your confidence with the first two sets and then go all out on the last set. Also, instead of going to absolute failure use some common sense.

For example, on the third set of five, shoot for as many reps as possible. Lets say that you do seven reps. You doubt that one more rep will go so you stop at seven. Wise move as building a pattern of success is always better than a pattern of failure. You got close enough, so increase the weight or difficulty at the next workout and live to fight another day. You don’t have to puke after a workout or risk an unnecessary injury with poor form. Also, forget about forced reps, negatives, and all that jazz. As Franco Columbu once said, “forced reps are better done by you.” Just take your last set to the limit and end it. Here is a sample HIT/Kettlebell program:

On the last set of every exercise, do as many reps as you can in good form. No crappy reps or forced reps allowed. When you can do seven reps on the last set, upgrade to some heavier kettlebells or pick a more difficult exercise.

Okay you know what weapons to use and you have a plan of attack. The only thing left is commitment and hard work on your part. If you are up to the challenge and want to get bigger and stronger with kettlebells, then execute the plan in this article today and email me in twelve weeks with your results.

Be the first to review “Mike Mahler – Kettlebell Solution for Size and Strength” Cancel reply
Digital Delivery
We are using Paypal for our auto-payment gateway.
If you have any difficulty in settle your payment with us, please contact our Customer Service team via:
Skype: [email protected] (Intell Centre Customer Services)
Email: [email protected]
Facebook: https://www.facebook.com/IntellCentre/